High Intensity Exercise: Research Shows Seniors May Have the Most to Gain! 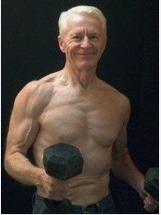 The following narrative review by Richard A Winett, PHD and Aaron M Ogletree, PhD, titled “Evidence-Based High-Intensity Exercise and Physical Activity for Compressing Morbidity in Older Adults” published in May of 2019, gives compelling evidence to show why safe, intense strength training should be fundamental to every older adults health strategy.  Note that morbidity is defined as “the condition of being diseased”.  One of the things that is often focused on is extending lifespan, but arguably it is more important to extend “health span”, being the period while we are alive AND healthy.

The sad truth is that the last 10 years of most people’s lives are very unpleasant from a health standpoint, and particularly the last 1 to 3 years.  Living long is obviously desirable but dying well is about quality versus quantity of life.

One of the things I would point out is that although the narrative review refers to older adults, the distinction is in a way, irrelevant. in my opinion, As all older people already know, time flies, and the things you do or fail to do while you’re young will have a major impact on how gracefully you age.

On one end of the spectrum, some young people do not exercise at all, while others engage in activities which, while providing some fitness benefits, have an unacceptable injury incidence rate. These may be acute injuries such as pulls, sprains, fractures or low back, and shoulder injuries, or they may be in the form of chronic issues caused by overuse due to the “more is better” mentality.  In other words, the saying “something is better than nothing”, is not necessarily true.  While it is important to exercise, it is critical to exercise properly and to not overdo it.  There is a “therapeutic window”; too little exercise is bad, too much can actually be toxic, so as Goldilocks teaches us, you need to find the amount that is “just right”.

Here are a few Key excerpts from the narrative:

“One reason for this review is that there have been considerable advancements in some areas of exercise science in the last 5 years,”

“For a century, resistance training was conceived as weightlifting with heavy weights required. Recent research has shown that using a higher degree of effort with lighter to moderate resistance in simple, time efficient protocols result in gains in strength and muscle mass similar to heavy resistance, as well as improvement of cardiometabolic risk factors, strength, body composition, and cognitive, affective, and functional abilities”

“It also is known that it is the degree of intensity in exercise that is most associated with improvement in many health-related mechanisms such as cardiorespiratory fitness, with fitness, not physical activity per se, being the strongest predictor of morbidity and premature mortality (13–15) and even health care expenditures (16).”

While high intensity interval training and sprint interval training are effective, they are high force activities and can produce injuries, and so in some ways, it may be preferable to obtain similar benefits from low force, slow motion, continuous tension, safe, strength training.

“Engagement in resistance training was until recently considered a mode of exercise quite secondary to aerobic exercise (56). However, it is now known that in addition to increasing strength, muscle mass, and functioning, engaging in resistance training is also associated with notable cardiometabolic benefits and can decrease risks for cardiovascular diseases, some cancers, and premature death”

“As noted previously, the more than century-old paradigm for resistance training, still prominent in some quarters, has been weight lifting. The most basic assumption is that the stimulus primarily involves the amount of weight lifted (ie, the external load) and that generally “heavier is better.” Heavier resistance has been believed to provide the best stimulus for increasing strength, muscle hypertrophy (ie, muscle stimulation and growth), and other favorable cardiometabolic benefits.”

“A series of studies by Phillips’ group, not noted in the revised guidelines (4), has shown that this long-standing paradigm is not correct (68). Instead, the stimulus that produces many benefits is defined by a degree of effort. In practice this means that light to moderate resistance can provide an excellent stimulus when a set of repetitions is taken to a high degree of effort and where the last repetition that can be performed is in good form (ie, contractile failure or “training to failure” (62)). This is not to suggest that such resistance training is “easy,” but rather that the use of lighter to moderate resistance may make resistance training safer and more accessible and appealing to a wider spectrum of the population. Thus, the adoption of such exercise among older people is feasible and may be used to intervene or slow the progression of disabling events.”

Find out more about what we do at Sustainable Success to enable you to reap all these benefits in well under one hour per week.