On May 23, 2007 a major stride in the quest for life extension occurred. Researchers Simon Melov et al announced a treatment that successfully reversed aging (You can check it here). This reversal occurred not in worms, fish, or rats; but actually occurred in human subjects. More importantly, this reversal was not simply a marker of aging, but an actual reversal toward normal youthful function at the genetic level. The researchers tested 596 genes that appeared to be markers of declining function as a result of age. Most of these genes were associated with mitochondrial function. This is important for two reasons. First, the mitochondria are the powerhouses for the cells of your body, they are the engine that makes us run. Secondly, mitochondrial DNA is easier to study with greater certainty of accuracy because all of your mitochondrial DNA comes only from your mother. As a consequence, differences in expression cannot be accounted for by the contribution of another person’s (i.e.-father’s) DNA that may react differently under experimental conditions. The study definitively identified 179 genes that were reversed by the intervention, and as the study stated “the transcriptional signature of aging was markedly reversed back to that of younger levels for most genes that were affected by both age and exercise”. 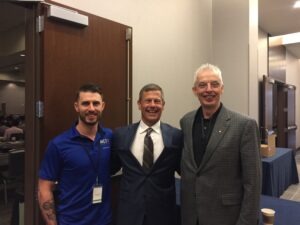 So what was this miracle treatment? The answer is STRENGTH TRAINING. Strength training performed twice a week for a period of 26 weeks. Even more amazing is that by standards of most people who participate in training facilities such as Ultimate Exercise (or Sustainable Success), it was strength training that was done relatively poorly on substandard equipment. The researchers had subjects perform leg press, chest press, leg extension, leg flexion, shoulder press, lat pull-down, calf raise, abdominal crunch and back extension for 3 sets of 10 reps, and arm flexion and arm extension for 1 set of 10 reps. The equipment was Universal Gym, Inc. equipment. Resistance was based on 50% of a 1 rep max and progressed to 80% of a 1 rep max. Over the study period the subjects increased their strength by 50% which made them only 38% weaker than 25 year old cohorts.

While impressive, it is not uncommon for state of the art training facilities to more than double strength in elderly clients. We have an 83 year old that uses significantly more resistance than the average 25 year old off the street. When I hired my current manager Ed Garbe, I told him that within 12-16 weeks of training he would likely be stronger than he ever had been at any point in his life. During our last workout together, he admitted to having skepticism with regard to that statement but that he is now a believer. He said “this stuff is literally the fountain of youth”.
Ed is 63 years old. (2007)

FINALLY, THE MOST AMAZING THING

After this article was released, the most amazing thing that happened was…NOT MUCH! Despite the epic search for life extension throughout the history of mankind, the first documented success in this regard was not met with much fanfare. There were a few articles in the media, but they were not very prominent and did not produce much response. The amount of coverage this received was miniscule when compared to the coverage received by resveretrol or caloric restriction. I believe the real reason this research has not gotten the response it deserves is because we are not talking about a pill. The benefit can only be obtained through one’s own effort, and (by the standards of the general public) damned hard effort at that. In the end, personal effort is the only answer for just about any goal we desire. In any entropic system, breakdown can only be prevented by the input of energy. This is the true joy of running a high intensity exercise facility; we get to interface with the small and dynamic portion of the population who understands this fact. As to the portion of the population who choose to abdicate this responsibility…we harbor no hard feelings. We and our clients will be happy to drive you to your doctor appointments, push your wheelchairs, and attend your funerals.”